This colourful wood-rotting fungus is commonly found on dead oaks and other hardwoods.

Citrin- literally means lemon-yellow, but don't let that mislead you: the fruitbodies are often a bright daffodil yellow.

Tiny it may be, but because of its gregarious nature (the tiny fruitbodies can swarm in hudreds or even thousands on a fallen trunk) the Lemon Disco is not a difficult fungus to spot. 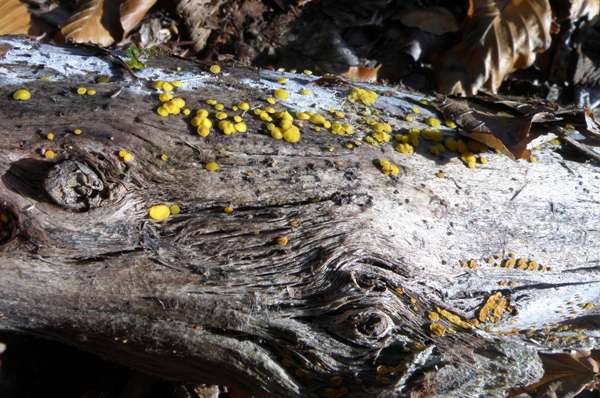 Common and widespread in most parts of Britain and Ireland, this wood-rotting ascomycete is found also throughout mainland Europe as well as in many other parts of the world including North America.

The specific epithet citrina refers to the lemon-yellow colour of the fruitbodies.

Most ascomycetous cup fungi are considered inedible, and w hether these particular cup fungi are edible is of little consequence because they are far too small to be worth gathering for eating.