Although there are relatively few formal records of the close relative of the scalycaps (Pholiota species), this is probably because it fruits very late in the season (often around the turn of the year) when few other fungi can be found - hence it is a time when people interested in finding and identifying fungi rarely venture into woodlands. 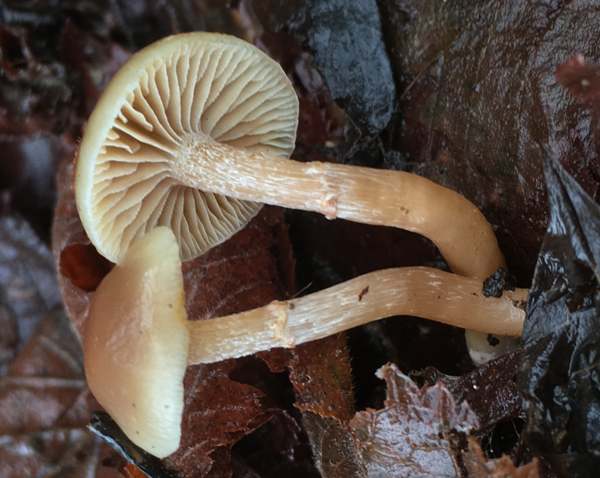 The stem ring is clearly visible on the pristine fruitbodies seen above, but the rings a fleeting and rarely evident on older specimens.

Probably not such an uncommon species, but found rarely in Scotland and only occasionally in England - nearly always in the south and midlands - and not yet (as I write in January 2014) formally recored from Wales or Ireland, Meottomyces dissimulans is recorded in most parts of mainland Europe from Sweden right down to Portugal. There are reports of this species being found also in North America, but it is possible that these records are erroneous and the result of confusion with the very similar American species Meottomyces mutans, which has a more substantial membranous stem ring.

This late-fruiting mushroom was described in 1882 by British mycologists Miles Joseph Berkeley and Christopher Edmund Broome (1812 - 1866), who gave it the scientific name Agaricus dissimulans. The currently-accepted scientific name Meottomyces dissimulans dates from a 2008 publication by the Italian mycologist Alfredo Vizzini, who established the new genus Meottomyces in which this is currently the only known British species.

The Meotto- prefix to the generic name Meottomyces may be honouring the Italian mycologist (a leading Truffle expert) Francesco Meotto; and the suffix -myces means fungus. The specific epithet dissimulans means 'one who is in disguise'.

Despite their attractive appearance, these are not edible mushrooms. 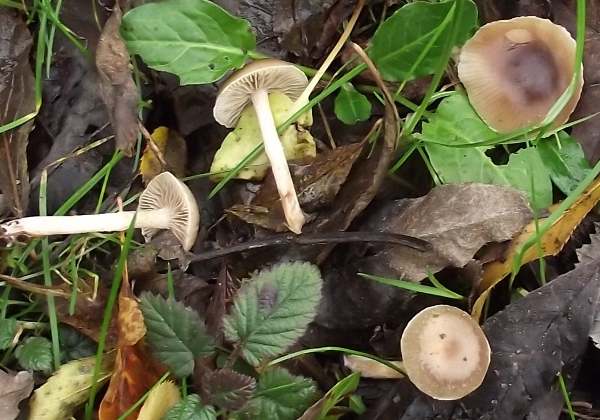 Pictures on this page were kindly contributed by Simon Harding and Richard Shotbolt.