Above: a white Pyramidal Orchid, Hampshire, 2014

The white variant of the Pyramidal Orchid is a rare find in the UK although it has been recorded as having established stable colonies in a few sites; most often, however, when white-flowered specimens are found they are growing within colonies of pink flowered Pyramidal Orchids.

Above: White-flowered specimens within a colony of pink-flower Pyramidal Orchids, East Anglia

The flowers are pure white and the spur is somewhat shorter than that of the pink flowered form.

Although it is the pink form of this orchid that is most widespread and occurs in vast numbers in some locations, it is always worth looking out for a white specimen since they appear in the same locations as the pink form. We have not yet personally seen this variant of the Pyramidal Orchid in the UK, but there are colonies to be found in France, Greece, Portugal and in Italy.

The white form of Pyramidal Orchid occurs in the same kinds of habitats as the pink-coloured Pyramidal Orchid Anacamptis pyramidalis, and both colour variants bloom at much the same time. The specimen shown above was photographed in the Lot Valley, France, in late May. 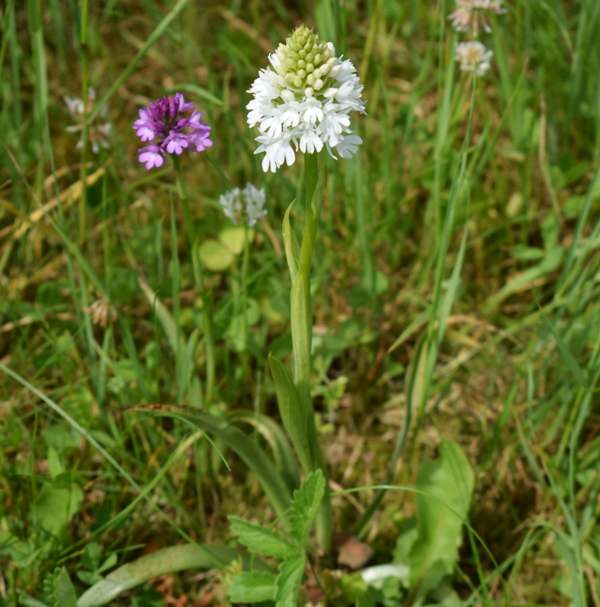 In Britain during a good year Pyramidal Orchids will appear in their thousands from early June until late July. Further south in Europe Pyramidal Orchids start flowering in March and April. The white variety flowers at the same times, although it is very scarce.

The genus name Anacamptis comes from the Greek anakampto, meaning 'bent back'; it refers to the shape of the flower spur. The specific epithet pyramidalis comes from Latin and means pyramid shaped; it is a reference to the form of the flower spikes of this wild orchid., while the subspecies name albiflora means 'with white flowers'.