Probably our best known and loved wild orchid species, the Bee Orchid is one of the few wild orchids which is managing to hold its own in an increasingly wildlife-hostile world and is even extending its territory in a few places.

Bee (Ophrys) orchids are essentially Mediterranean species and the few that occur in northern Europe are at the limit of their range, although the warmer temperatures resulting from climate change may mean that they become more common in the future.

A robust specimen of the Bee Orchid can grow as tall as 65cm and we have seen some plants with as many as 11 flowers. Much smaller plants with only two or three flowers are also common. It is localised, and its flowering is sporadic which accounts for failures to find it flowering in the same stations year upon year.

This well-known orchid is widespread not just in the southern half of the UK and Ireland, but can be found in many European countries, too. We have photographed it in England, Wales, Ireland, France, Portugal and also found it growing in Bulgaria and Slovenia. It occurs as far north in Europe as Holland and Denmark.

Ophrys apifera tolerates moist-to-dry calcareous habitats, and in Wales (where we live) Kenfig National Nature Reserve is a very good place to see Bee Orchids - they can be found in meadows there, and also in many of the other coastal nature reserves. Although mainly a plant that favours unimproved grasslands and meadows with a chalk base, the Bee Orchid is sometimes also found in much heavier clay soils. It pops up in old quarries, pits and spoil heaps as well as in other unattractive industrial sites. It is perhaps this tolerance of such a variety of habitats that is helping this orchid to survive and increase in number.

From early June and into July

The flower on the right shows pollinia, which are falling forward and down to rest on the stigma to facilitate self-pollination.

The Bee Orchid is thought to be largely self-pollinating, particularly in the UK, and this may account for the high incidence of so-called monstrous forms.

The appearance of the flower lives up to its name as the lip closely resembles a bumblebee. It has three bright pink sepals and usually produces three to five flowers but exceptionally ten or more - the plant at the top of this page had eleven flowers.

The Bee Orchid flowers quite late. In the UK June is the peak flowering time, but, even in the Mediterranean as far south as Portugal, this orchid starts to flower in April and can often be found well into May when most of the other ophrys species that occur there have long died back.

Above - Ophrys apifera var. trollii, also known as the Wasp Orchid, has a rather narrower and longer lip than the normal Bee Orchid. The lip tapers to a fine point and has somewhat erratic markings. It occurs in a few places in the West Country but is otherwise rare in Britain. Picture: Simon Harding

Pictured above is Ophrys apifera var. belgarum, a rare variety of Bee Orchid found from time to time. 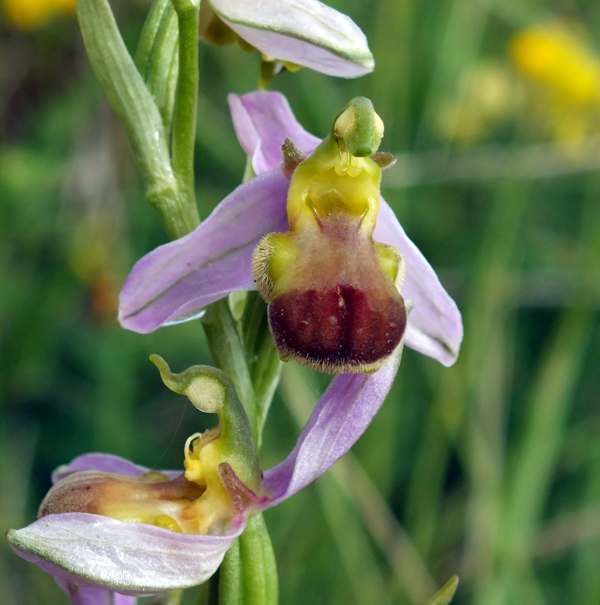 Ophrys apifera var. bicolor has a curious flower devoid of the lip markings we usually associate with Bee Orchids

The pictures on this page were taken in Kenfig National Nature Reserve in South Wales (top) in mid-June, the Algarve in Portugal (second down) in May, the Lot Valley in France (third down) in early May, and Hampshire (middle) and in the Sibillini Mountains, Italy (below) in June.

The genus name Ophrys comes from Greek and means 'eyebrow' - a reference to the hairy fringe of the lip of the flower of many orchids in this genus. The specific epithet apifera means 'carrying bees'; it refers to the bee-like appearance of the flowers of this orchid..

Chris Thorogood and Simon Hiscock (2014) Field Guide to the Wildflowers of the Algarve; Kew Publishing