Above - a robust plant photographed in mid-May near to La Pezade, southern France

This subspecies of the Fly Orchid is only found on the southern causse around Aveyron, where it was first recorded and named in honour of the French botanist G. G. Aymonin. 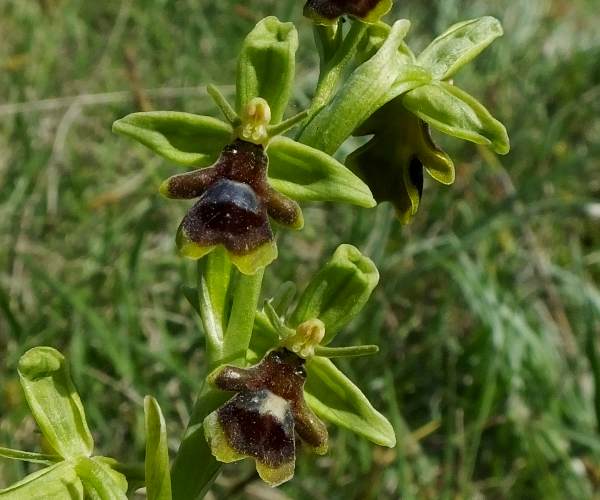 The specimen shown above was photographed in late May on the southern causse near La Pezade, in France.

Ophrys insectifera subspecies aymoninii can easily be distinguished from the Fly Orchid Ophrys insectifera by the bright yellow 'border' on the tip of the flower lip and, which is also sometimes present on the side lobes. As with Ophrys insectifera, the flowers closely resemble little flies. The lip forms the body of the insect, the mirror is shiny like the folded wings of a fl,y and there are even two glossy depressions at the base of the lip that represent the insect's eyes. 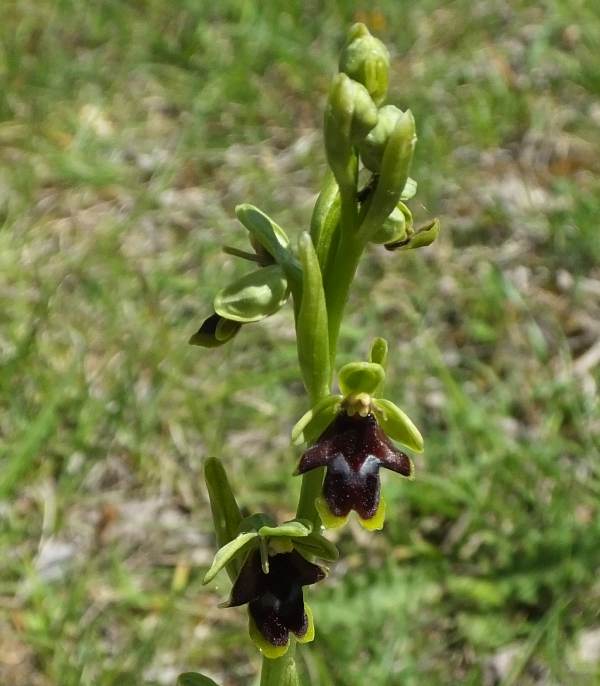 Aymonin's Fly Orchid plants can grow quite tall - up to 60cm is not uncommon. The plant is spindly and has a lax inforescence that carries up to 15 flowers. This orchid can form colonies of up to 10 plants, but despite this they remain difficult to find because the drab colouring blends in so well with the surrounding grass and other plants. Single specimens can also be found.

Aymonin's Fly Orchid is limited to a small area of the most southerly part of the Massif Central in France.

Ophrys insectifera subsp. aymoninii grows in dry, often rocky calcareous soils where the grass is short. It tolerates sunny positions but can also be found hugging bushes or shrubs.

From late April through to the beginning of June.

There are no recorded varieties: