Wildflower species of the Rocky Mountains...

The Rocky Mountains are the defining feature of Colorado, Idaho, Montana and Wyoming, and they form part of the massive range of mountains now referred to as the Continental Divide. Once called 'Backbone of the World' by the Native Americans, long before any of us knew what The World really meant, and covering an area of nearly 450 square miles, these massive rocky peaks, forests, lush mountain meadows, rivers, streams and deserts certainly deserve the backbone epithet: they are as vital to the survival of the numerous wildlife species that live there as our spines are to us.

Spiranthes romanzoffiana in a wet meadow

Designated as a National Park in 1915, Rocky Mountain National Park has trails and roads ascending to more than 12,000 feet above sea level. The mountain scenery is breathtaking, both looking up from the valleys and also looking down from the top of the Alpine Ridge Trail.

Long before the area became a National Park it was inhabited by the animals that still make it famous, and also by people: there is evidence of human occupation going back at least 10,000 years. It was not until well after the first 'European American' settlers arrived to farm and make their livelihoods that interest in conserving the area for its nature and wildlife took hold.

In the early 1900s, a desire by certain sections of society to conserve the area was communicated to Congress. The main parties involved in this initiative were local chambers of commerce, conservationists, women's clubs, Enos Mills Colorado Mountain Club, and R. B. Marshall of the U.S. Geological Survey. There was, however, considerable opposition from others who thought that the measures that would be introduced in the interest of wildlife conservation would have an adverse affect upon their lives and their ability to earn money. The Front Range Settlers League of Estes Park, ranchers, cattlemen, and even miners all objected strenuously, but it was the conservationists who got their way in the end.

Entry passes to Rocky Mountain National Park can be obtained on a daily, weekly or annual basis. An automobile pass costs US 20 dollars and lasts for a week; pedestrian and bike access is 10 dollars, and an annual pass is 40 dollars (all these are 2013 prices). If you are planning to visit several national parks during your stay, an annual pass for all of the American National Parks is 80 dollars (again, this was the 2013 price).

Road access to the Park is excellent. If you are not travelling in by car each day, regular shuttle buses run from Estes Park carry visitors between the various Information Centres and the numerous Trail Heads within the park. Visitor Centres are located throughout the park to help you to get the most out of each of the areas; they are staffed by enthusiastic and knowledgable Rangers, who can tell you the best places for seeing wildlife or for enjoying your chosen activity.

A visit to this area is an opportunity for anybody interested in the natural world to experience life in some of the most beautiful and dramatic scenery to be found anywhere in America. For those with a special interest in geology the area is a paradise, bearing testament it does to the numerous fault lines that caused the earth's crust to move up and down, creating the landscape we see there today. The effects of glaciation and the subsequent retreat of the ice around 10,000 years ago caused the scouring out of massive basins. Some of these have become lakes from which rivers flow either east towards the Atlantic Ocean or west to the Pacific Ocean.

The ideal time to see most of the wildflowers in the Park is from mid-June to mid-July, but even as late as August the wildflowers will still be blooming at higher altitudes. Several species of Indian Paintbrush occur in the Rocky Mountains, but the rarest of them, Sulphur Paintbrush Castilleja sulphurea) is found high up in the Alpine region along with Moss Campion Silene acaulis, Alpine Sunflower Hymenoxys grandiflora, and Purple Fringe Phacelia sericea to name but a few.

Driving up high into the mountains to the Alpine Ridge Visitor Centre, for instance, particularly if you use the Old Fall Road (a one way dirt track) rather than the main blacktop road, is an excellent route for seeing some of the other special plants such as Roseroot Rhodiola rhodantha and Common Alp Lily Lloydia serotina. Common Alp Lily is known as Snowdon Lily in the UK and is now extremely rare, surviving in only a few remote locations in the Snowdonia mountains in Wales.

The river valleys and areas surrounding the lakes, where there is a higher level of moisture throughout the summer, are also excellent. It was in these damp meadows that we found the orchids mentioned below along with other lovely and iconic wildflowers of the region: Elephant's Head Pedicularis groenlandica, more common on the western side of the Park, where it grows in vast colonies in damp meadows, and two of the beautiful gentians of the area, Parry's Gentian Gentiana parryi and Rocky Mountain Fringed Gentian Gentianopsis thermalis. 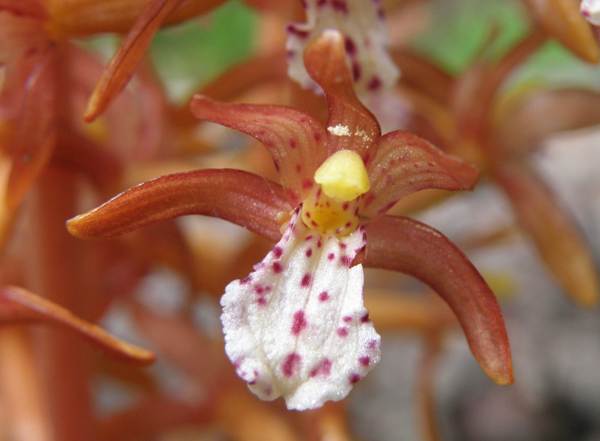 If you are interested in wild orchids there are lovely colonies of Hooded Ladies'-tresses Spiranthes romanzoffiana. Known in the UK (where it is an endangered species) as Irish Lady's-tresses, this plant is interesting for reasons other than rarity alone: it is found in parts of Ireland and Scotland but is not present at all on mainland Europe. The jury is still out on how the same species can appear on continents which have the Atlantic Ocean separating them.

As well as being home to such wonderful plantlife, Rocky Mountain National Park is also a paradise for birdwatchers - and indeed for anyone with a general interest in wildlife and wild animals. During our walks we were lucky enough to encounter Marmots at very close quarters and to see and photograph Mule Deer, Elk, Moose and some of the many species of Chipmunks that live in the park.

Wild Turkeys are often spotted wandering about in gardens in the towns around the national park along with the delightful hummingbirds that seem to be particularly fond of house verandas, patios and decks. 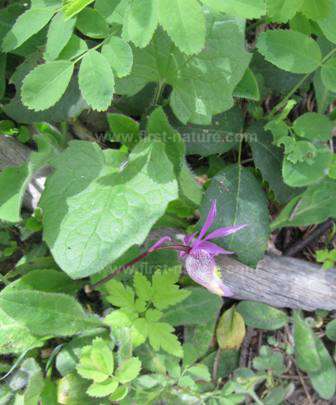 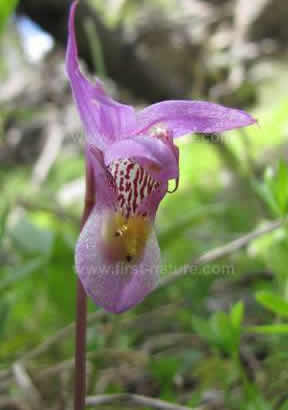 A closeup of the beautiful flower of this rare orchid, whose future is threatened everywhere that it occurs - picture Jim Sneary.