The Black Falsebolete is a very rare woodland mushroom; it is mycorrhizal with pine trees and usually occurs solitarily or in very small groups. (I have only ever seen singletons.)

Despite looking like a bolete, this dowdy but chunky fungus is not closely related to Boletus, Suillus and the various other bolete genera, and its irregularly globose spores are quite different from the generally fusiform spores of true boletes. It does, however, have a pored fertile surface unlike other members of the order Thelephorales. 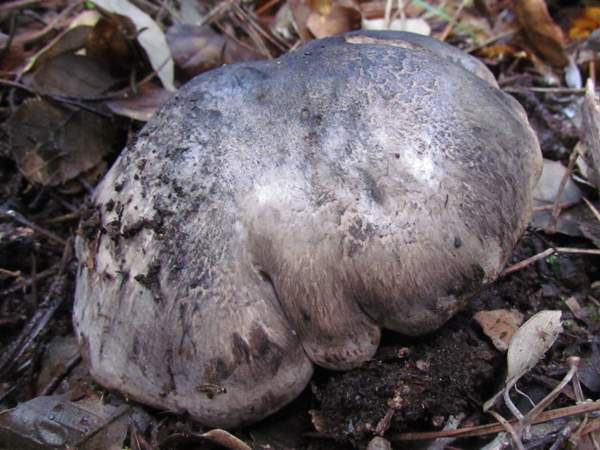 Rarely if ever found in Britain except in Scotland, where the Black Falsebolete is very localised, this species is recorded from many other parts of Europe, stretching from Scandinavia down to the Iberian Peninsula, as well as parts of North America. Currently (2017) all official records for this species on the Fungal Records Database of Britain and Ireland (FRDBI) are from Scotland.

This species was described scientifically from Scotland in 2006 by British mycologists Roy Watling and J. Milne. Prior to this date, the few collections from Britain were recorded as Boletopsis leucomelaena but have since been reassigned.

This very rare species should not be collected unless under special permit and when essential for scientific study.

If you have found this information helpful, we are sure you would also find our book Fascinated by Fungi by Pat O'Reilly very useful. Author-signed hardback copies at a special discount price are available here...