Cup fungi, and dark brownish ones in particular, are particularly difficult to identify with certainty; however, Peziza violacea is distinctive not merely because of its purplish colouring but also because of the way it develops into a scalloped cup at maturity. The fertile surface is inside the cup, as with all Peziza species. (The first time I saw dark Peziza I wrongly assumed that it was the empty dried-up case of an earthball, but there was no sign of any of the spore mass inside and yet clearly it was not a particularly old fruitbody.)

As gusts of wind blow across the top of the cup, the resulting change in air pressure triggers the discharge of ripe spores from within their asci flasks; the spores are then carried away on the breeze - a cunning system for releasing spores at those times that are best for their long-range distribution!

Peziza violacea is an uncommon find in Britain, where it occurs on soil in broadleaf and mixed woodlands, most often on burnt sites. This cup fungus occurs also in many parts of mainland Europe and in North America, where some people refer to it as the Violet Fairy Cup.

Note the much darker colour of old fruitbodies. Cups exposed to sunlight soon lose most of their violet or lilac colouration and turn brown or black; they are then easily mistaken for Peziza badia and other dark brown cup fungi. 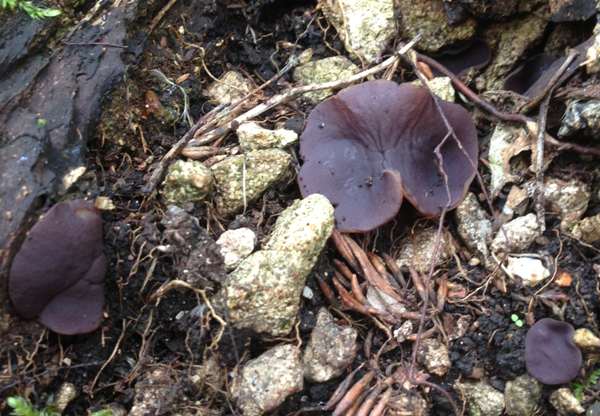 This cup fungus was described scientifically in 1801 by Christiaan Hendrik Persoon, who called it Peziza violacea - the name by which it is still generally known today.

Peziza, the genus name, may come from a Latin root referring to a foot - most fungi in this group being sessile (footless or stemless). The specific epithet violacea refers to the violet color of the fertile surface of this cup fungus.

This cup fungus is not considered edible. It is most probably poisonous if eaten raw or inadequately cooked, when it could at least cause seriously unpleasant stomach upsets. (The same is true even of noted edible ascomycetes such as Morchella esculenta, the Morel, and Morchella elata, the Black Morel.)