One of the most widespread and abundant of the dragonflies in Britain and Ireland, the Common Red Darter (also referred to as simply the Common Darter) is an insect of shallow lakes, small ponds and other still or very slow flowing water. In Britain this is one of our smaller dragoflies, with a typical body length of 40mm. A mature male is shown in the picture above. 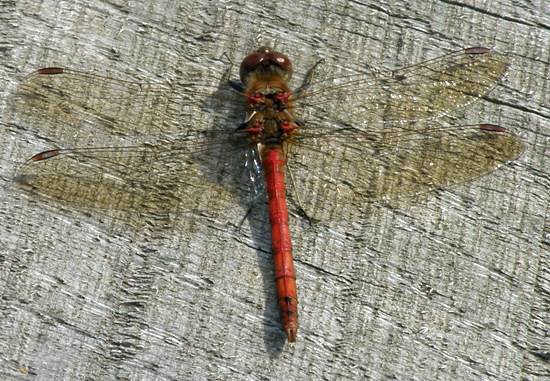 Nymphs of this species live in dense weed and are of limited interest to trout and other fish; however, the adults are just so wonderful to watch as they perform their aerobatic displays while hunting smaller insects. In Britain the adults can be seen on the wing from late June until the end of October and sometimes well in to November.

Unlike the reddish-orange male, pictured above, the female (pictured below) has a body that is yellowish-orange. (When newly emerged, males are also yellowish, but they soon develop didtinctive red-orange abdomens.)

There are about forty species of dragonflies and damselflies in the British Isles, although some are now quite rare and hardly ever seen.

If you found this information helpful, you would probably find the new 2017 edition of our bestselling book Matching the Hatch by Pat O'Reilly very useful. Order your copy here...