Below: Claerwen Reservoir on the Elan Valley Estate 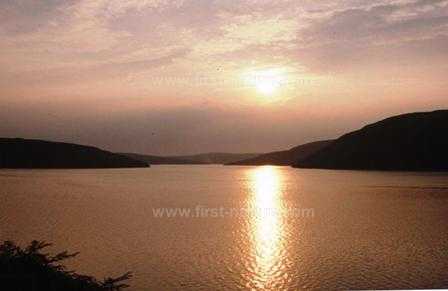 This National Nature Reserve is not easily accessible, and getting into it requires a lengthy hike over some very rough terrain. If you are not quite up to it, don't worry: it is possible to get to see many of the special plants and birds that inhabit the reserve and its surroundings in other parts of the Elan Valley Estate that are a bit easier to get to and walk in.The whole area is a mecca for wildlife and has outstanding scenery.

The site is managed jointly by the Elan Valley Estate and Natural Resources Wales (NRW); it forms part of the Elan Estate, which is owned by Dwr Cymru-Welsh Water.

Rhyader Village is on the main A470 road between Llangurig and Builth Wells.

From Rhayader, follow signs to Elan Valley on the B4518 road running from Rhyader westwards towards Devils Bridge.

There is only one track that leads across Claerwen NNR. It can be picked up above the northern end of Claerwen Reservoir, but be aware that this track runs over some extremely difficult terrain, which in places is steep and can also be muddy. This route is rumoured to have been used by Monks travelling between Aberystwyth and the Elan Valley. Since the walk is widely regarded as being extremely punishing, one can only assume that the Monks were fulfilling some penance by travelling along it!

In the 18th century, this track was also used as a drovers' road.

There are no facilites on the reserve itself, but the Elan Valley Estate has an excellent Visitor Centre with a café and public toilets along with a shop, information desk and small exhibition. The Centre is close to Elan Village, and there is plenty of car parking there as well as grassy riverside areas where you can relax or have a picnic.

Below: The Bog Orchid, one of Britain's rarest plants, grows in the Elan Valley Estate 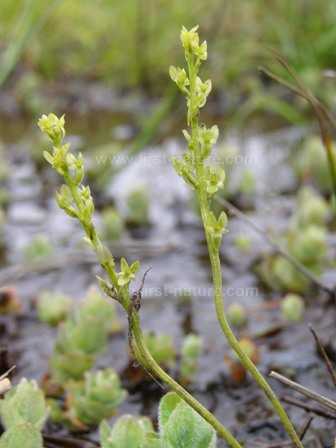 The reasons for the special conservation designations for this nature reserve are some of its high-quality habitats, the special plants that grow there, and its birdlife.

Because the terrain is so inhospitable some parts of the land have not been improved for agricultural purposes, and neither have some of the many lakes and many of the watercourses on the reserve been subject to water abstraction or agricultural pollution.

The standing waters are so-called 'oligotrophic lakes' which means that they contain very little in the way of plant nutrients but have a high level of dissolved oxygen. One of the special (and rare) plants that grows in this habitat is Floating Water-plantain (Luronium natans), a species of high conservation value because the UK has a large proportion of the world population. Because of its highly specific habitat requirements this plant is very difficult to cultivate. Floating Water-plantain rarely blooms, and identification without the presence of flowers is difficult. Other places in Wales where this rare plant grows are Dowrog Common in Pemrokeshire and the Montgomery Canal.

Other interesting habitats and species that you can see at Claerwen NNR are Blanket Bogs - in fact, Claerwen has the largest area of this habitat in the central Wales uplands. Blanket Bogs are wide tracts of acid peatland, and they occur only in places where there is a lot of rain. Plants that grow in Blanket Bog include Bog Rosemary (Andromeda polifolia) and Hare's-tail Cottongrass (Eriophorum vaginatum), along with more common species of heathers. The carnivorous plant Round-leaved Sundew (Drosera rotundifolia) also grows in the Blanket Bog; it feeds on the myriads of small insects that also make their homes there.

Although much of the interesting plant life to be found at Claerwen results from the lack of interference by Man, there is also an area that supports interesting species as a direct result of mans intervention - the intensive, 1000-year regime of mining for heavy metals. The resulting rock outcrops and old buildings have been colonised by heavy-metal tolerant species of liverworts and mosses, including the rare Lead Moss, Ditrichum plumbicola, which grows in dense yellowish mats. Other scarce species associated with the mining area are Vezdaea cobria, Gyallidea subscutellaris and Lecanora handelii.

The birdlife in the Elan Valley area is probably its most renowned feature, and over 180 species of birds have been recorded there since records began in the 1880s. Some of the rarest breeding birds there are Merlins (Falco columbarius), Hawfinches (Coccothraustes coccothraustes), and the Lesser Spotted Woodpecker (Dendrocopus minor) which has white 'bars' across its back and a much larger red crown than the Great Spotted Woodpecker (Dendrocopus major). Other birds often seen in the area include Red Kites (Milvus milvus), Buzzards (Buteo buteo), Golden Plovers (Pluvialis apricaria) and Ravens (Corvus corax).