Below: A tranquil scene at the Anglesey Fens in early summer - picture Mike McCabe, NRW

After East Anglia, Wales has the UK's second largest expanse of fens. These fens include four National Nature Reserves (NNRs). Cors Erddreiniog on Anglesey is the largest of the three on Anglesey, which also has Cors Bodeilio and Cors Goch; the fourth is Cors Geirch, which is on the Lleyn Peninsula. These NNRs contain a rare type of wetland fed by alkaline water that drains into the fens from the porous limestone rocks that surround them. When wetland habitats are on peaty soil over sandstone, granite or other chalk-deficient substrates they are normally acidic in their composition. It is the alkaline water draining into these wetlands in Wales that creates the conditions that support the unusual combination of plantsthat are found there. Many of these plants can exist only in this type of highly alkaline habitat. The plants in turn support many other creatures, including certain insects that are becoming increasingly rare elsewhere in the UK.

A walk in any of these nature reserves in spring and early summer when they are full of flowers and buzzing with insect and bird life quickly shows why this habitat is of such international importance that it deserves to be protected by both national and international conservation designations.

At the time of writing, the Anglesey Fens along with a site on the Llyn Peninsula are the subject of the biggest wetland restoration project in Wales under the LIFE+ programme 2007. Work on this five-year partnership project began in February 2009, and the main objective is to bring 751 hectares of this important wetland habitat into favourable conservation status and to maximise their conservation potential.

As well as improving wildlife habitats, the project has a focus on the people who live and work in the area. It is hoped that local schools and businesses will also benefit from the work being carried out and from increased visitor levels to these wildlife havens.

Cors Erddreiniog, the largest of the Anglesey fens, has a varied terrain which includes small lakes, heathland and woodland as well as extensive areas of reed bed. The site is managed by the Countryside Council for Wales (CCW). This type of wetland is now extremely rare in the UK and Europe, and we are fortunate in having large areas of this internationally important habitat protected in Wales.

Below: The entrance to Cors Erddreiniog NNR in Capel Coch, Anglesey

On Anglesey take the A5025 from Menai Bridge to Benllech and then turn left onto the B5108 towards Brynteg.

From there follow signs to the village of Capel Coch.

Access to the nature reserve is via a narrow track beside a cottage in Capel Coch, and there is only very limited roadside parking available in the village.

All three Anglesey Fens nature reserves are open all year round.

Many of the tracks in the reserves are rough in places and not suitable for wheelchair users. At Cors Erddreiniog a boardwalk, running around the reed beds for around 1,000 metres, leads to a bird hide overlooking one of the freshwater lakes.

Cors Bodeilio and Cors Goch also have boardwalks. Other paths in the reserves are for the most part reasonably level but the woodland sections are steep in parts. Due to the grazing programme using cattle and ponies, the paths are frequently muddy in the winter and so appropriate footwear is necessary. Straying off the boardwalk or other clearly defined paths in the reserves, even in summer, can mean quickly sinking up to the knees in mud, and I write from personal experience in the matter!

Other than interpretation boards at the entrances there are no facilities at the reserves.

Below: The entrance to Cors Goch NNR

This Nature Reserve has been owned and managed by North Wales Wildlife Trust (NWWT) since 1963, and became a National Nature Reserve in 1994. Prior to its purchase by NWWT, the site was being used as a rubbish dump and there were even attempts to turn it into a landfill site. Today it is famous for its acidic heathland and calcareous fenland, which support rare plants and numerous birds, insects (up to 19 butterflies species have been recorded on the site) and other wildlife.

The management programme for the reserve includes controlling the growth of trees and bushes by grazing, and with volunteers who work on the reserve cutting and pulling the plants that would if left would take over and crowd out the other rarer ones.

On Anglesey take the A5025 through Pentraeth until you come to a junction about 2km (1.5 miles) beyond. Turn left towards Llanbedrgoch and drive through the village. After about 1.5km (1 mile) there is a sign for the track on the left hand side of the road, leading to the Nature Reserve.

A lay-by on the left just beyond the track can accommodate two cars. In the summer it is also possible to park on the grass verge.

Open all year round. 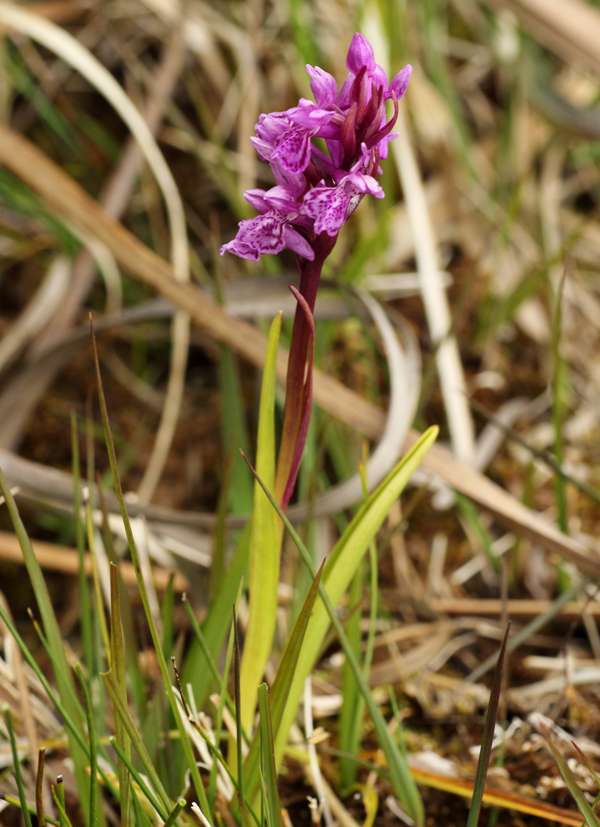 The paths in the reserve are unsurfaced and the walking varies from easy to moderately steep. The entrance to the site is through a gate and there are styles between some of the fenced-off fields inside the reserve. This site is therefore unsuitable for wheelchair users or for prams and pushchairs.

After heavy rain, the boardwalks can be unevenand slippery, and the paths are nearly always muddy in the winter. Appropriate footwear is essential.

There are three possible routes around the site, the first is for a short ‘taster’ walk (about an hour) and two longer routes, for half or whole days, which allow time for a thorough exploration of the reserve and its variety of habitats. From the higher part of the reserve there are lovely views across the expanse of bog and the surrounding countryside.

Some of the quieter corners are suitable for a picnic lunch or simply to sit and enjoy the sights and sounds of Cors Goch.

Cors Bodeilio is a nationally important nature reserve due to its unique mire, which lies in a shallow limestone valley between Llangefni and Pentraeth. The reserve is managed by CCW.

On Anglesey take the A5025 road from Menai Bridge to Pentraeth. Turn left after the shops and then left again passing the school.

Continue down this narrow lane for approximately 1.5 miles until you see the entrance to Cors Bodeilio ahead of you.

There is a small parking area just inside the reserve gate.

Open all the year round.

A boardwalk was constructed in 2007 which has provided excellent access to this reserve. In parts it is constructed on floating bog and so may become somewhat uneven and partially submerged after heavy rain. Wellington boots are therefore recommended for visits outside high summer. There are also large drainage ditches throughout the reserve so care needs to be taken if you stray from the paths.

In order to protect breeding birds, between April and August it is forbidden to take dogs on to the reserve, and at all other times they must be kept on leads.

There are no facilities at the reserve.

Below: A Lesser Whitethroat chick at Cors Bodeilio 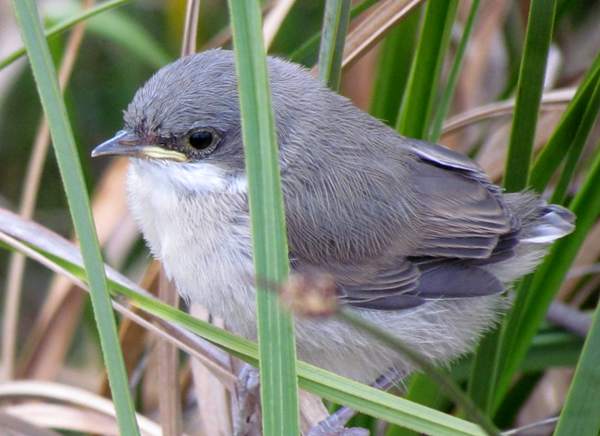 These three equally important nature reserves are designated as a Special Area of Conservation (SAC) and they protect and support some very rare wildlife species including rare plants, birds and insects. The expanses of water in the fen nature reserves are home to many birds in the winter and also provide breeding habitat for a number of species in the spring and summer.

A winter walk in any of these nature reserves can be a bleak experience although it is a good time to see the birds that take refuge there until spring is well on its way. Spring and summer are when the fens come to life, reverberating with bird song and the buzzing of insects. Breeding birds on these sites include Grasshopper Warblers (Locustella naevia), Reed Buntings (Emberiza schoeniclus), Sedge Warblers (Acrocephalus schoenobaenus), Kestrels (Falco tinnunculus) Lesser Whitethroats (Sylvia curruca) and Stonechats (Saxicola torguata). In the quiet evenings Barn Owls (Tyto alba) silently hunt across this magical landscape for the many small mammals that make their homes in the Anglesey Fens. The reserves are one of the few places where Lapwings (Vanellus vanellus) can be seen and where they also breed. Many of the bird species to be found in our nature reserves are seriously threatened and so, if you do visit in the spring and summer, please take great care not to disturb them.

Below: The Fly Orchid (Ophrys insectifera) - one of the rare plant species found in the Anglesey Fens 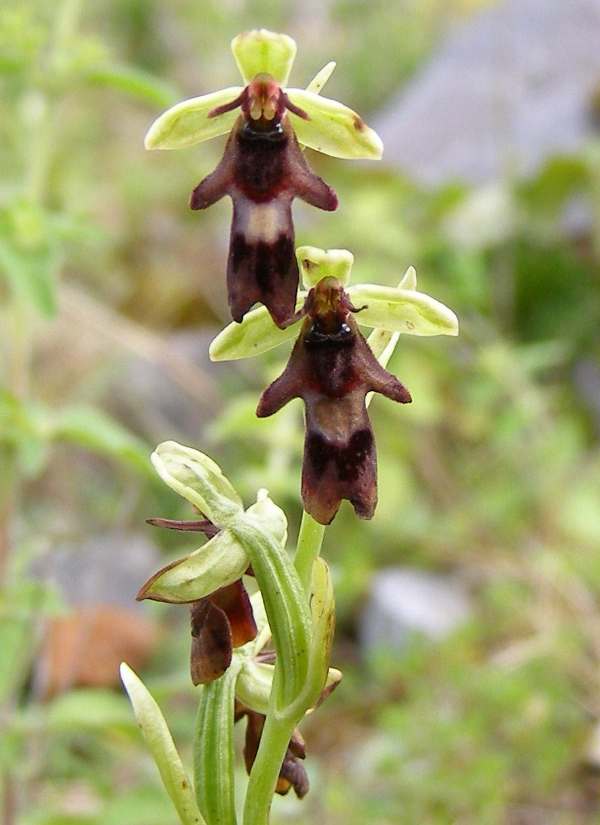 The surrounding limestone of the fens, and the alkaline water that drains through it and into the fens, strongly influences the wide range of locally and nationally scarce species to been seen, including the Fly Orchid (Ophrys insectifera) which grows on tussocks in both Cors Bodeilio and Cors Erddreiniog, and the Narrow-leaved Marsh-orchid (Dactylorhiza traunsteinerioides). A walk through Cors Erddreiniog in June can be a suprising experience especially for those of us who have somewhat fixed ideas about which plants we should expect to see in particular habitats: coming across the Lesser Butterfly-orchid (Platanthera bifolia), normally associated with open woodland edges or meadows on calcareous substrates, in the middle of what looks like a peat bog, clearly illustrates the effect of the alkaline flushes draining into the reserve! Go at the right time and it is possible to see seven separate orchid species growing within a metre of each other: Common Twayblade (Neottia ovata), Marsh Fragrant Orchid (Gymnadenia densiflora), Marsh Helleborine (Epipactis palustris), Northern Marsh Orchid (Dactylorhiza purpurella), Early Marsh Orchid (Dactylorhiza incarnata), Fly Orchid (Ophrys insectifera) - and Lesser Butterfly-orchid, of course. The Fly orchid is extremely rare in Wales, and even rarer is the yellow form which also grows in the Anglesey Fens - see below. In 2012 the Frog Orchid (Dactylorhiza viridis) was found on a recently purchased piece of land which extends the area of Cors Erddreiniog NNR. Anglesey is a well known location for the Frog Orchid in Wales, but in recent years it has only been possible to see them on private land. By including this new land in the area managed as a NNR it is possible that this rare orchid may extend its territory and increase in numbers.

Below: A very rare yellow form of the Fly Orchid found in the Anglesey Fens

Other rarities include Rugged Stonewort (Chara rudis), and Hedgehog Stonewort (Chara pedunclulata), and in Cors Bodeilio, the rare fungus Olive Earthtongue (Microglossum olivaceum) has been discovered.

Fifteen species of dragonflies, including the Common Hawker (Aeshna juncea), can be seen at Cors Goch, and amongst the flowers there are many butterflies, both the Small Pearl-bordered Fritillary (Boloria selene) and the Small Copper (Lycaena phlaeas) are present at the reserves. Two insect rarities at the fens are the Southern Damselfly (Coenagrion mercuriale) and the Marsh Fritillary Butterfly (Euphydryas aurina).

Rare damselflies live in the fen nature reserves, too. On a recent visit (in mid-June) we saw both Southern Damselflies and Scarce Blue-tailed Damselflies.